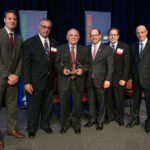 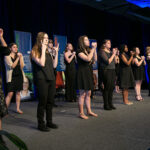 JSSA hosted its annual Spring Benefit,  An Evening with JSSA, on Sunday, April 17, 2016.

Nearly 500 attendees celebrated JSSA and honored Norman Dreyfuss with the 2016 Joseph Ottenstein Award for Community Leadership. Norman is executive vice president with the IDI Group Companies and the developer of Leisure World and many other projects throughout the Washington, D.C. region. He has worked in all aspects of community planning and growth and is a champion of affordable housing, a member of the Montgomery County Planning Board, and a devoted supporter of JSSA. Among his many contributions, Normal has supported JSSA programs for those with disabilities, provided a vehicle to transport seniors, and gives yearly student educational scholarships.

An Evening with JSSA included an inspirational speech from special guest Marlee Matlin, an Academy Award-winning actress, activist, and advocate for better hearing health. Marlee received worldwide critical acclaim for her film debut in Paramount Pictures’ Children of a Lesser God, for which she became the youngest recipient of the Best Actress Oscar, at age 21. At JSSA’s Spring Benefit, Marlee shared her experience of growing up deaf. She explained how she relied on courage and Jewish values to help follow her dreams and become a successful actress.

Send Us a Message »

“I’m comforted by knowing that thanks in large part to JSSA Hospice’s support, the few short months we had together at the end were spent focused on us and on living, not dying.”

Your contribution can directly impact the lives of people in our community.

Stay connected and up-to-date on what's new at JSSA.